On 27 and 28 June, a transparent dome installed in the centre of Bilbao shows passers-by how the service to support staying at home, etxeTIC, works, from the perspective of a user in a situation of dependency who receives remote support it their home through technological devices. The Etxaniz centre in Bilbao, the first in operation with the etxeTIC model, already provides support to 160 people in a situation of dependency and their carers. In turn, another 25 people receive with this resource the support normally offered by a daycare centre. 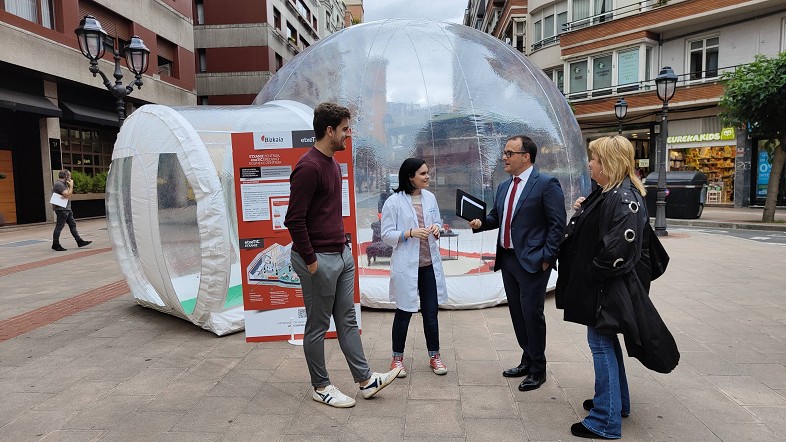 This week Bizkaia Provincial Council is showing the public the innovative service to support staying at home, etxeTIC, focused on improving the quality of life of both the people in a situation of dependency and their carers. For this purpose, on 27 and 28 June the provincial institution has installed on Ercilla street in Bilbao an innovative exhibition space that shows the public the operation of this pioneering support service, which combines technological and relational features, in-person and remote, operated from a reference daycare centre.

Thus, in an inflatable, sphere-shaped transparent polyester dome with a diameter of 5 metres, it will be possible to see how the etxeTIC service operates from the perspective of a user who is in the living room of their home and is supported by professionals who, in turn, are in the daycare centre.

The dome allows access in small groups, during a timetable of 10:30 to 19:30. It will have information on its exterior and will be assisted by professionals from the Etxaniz centre, the first with the etxeTIC model in Bizkaia.

Since it opened, more than 160 people in a situation of dependency living in their homes benefit from this service. These people have support plans for the home-based care ecosystem, which include personalised actions for both the person in a situation of dependency and for their carers, complemented by support technologies, a tablet and activity bracelet, which help to monitor and prevent risks with this regular supervision. In turn, another 25 people receive at Etxaniz the support normally offered by a daycare centre.

Intervention in and from the etxeTIC centre

The interventions launched at the Etxaniz centre for users in a situation of dependency combine the online and in-person modalities. Among the personalised actions included in the online monitoring there is functional training, cognitive training; training in basic daily life activities, behavioural treatments, affective treatments, etc. Likewise, almost all of the people in a situation of dependency benefiting from the service regularly attend in person a fall risk prevention workshop.

Carers receive online assistance focused on emotional support and cognitive training. At the centre itself, workshops are given on emotional support, training in physical moving and in how to handle behavioural disorders. For those who need it, there is a respite service where people in a situation of dependency are cared for by professionals from the daycare centre while their carer attends the workshop.

To date, 35 in-person workshop sessions have been given, which have been attended by a total of 93 people. During this period since its launch, it has been found that the tablets were used for 60 minutes per day on average in homes. Thus, the homes that have the etxeTIC service are connected with the centre's professionals, with whom more then 100 video calls have been made and more than 300 and written messages have been exchanged.

After the Etxaniz centre, in Bilbao, the next additions to the etxeTIC model will be located in Etxebarri, Zalla, Basauri and Mungia.

Bizkaia Provincial Council thus advances, in a step-by-step and firm manner, in the deployment of this new service to support remaining at home, etxeTIC, regulated by Provincial Decree 173/2021, of 21 December, as key to support home-based long-term care from a nearby community centre, using the potential of new technologies as facilitators and accessories for in-person care at daycare centres.