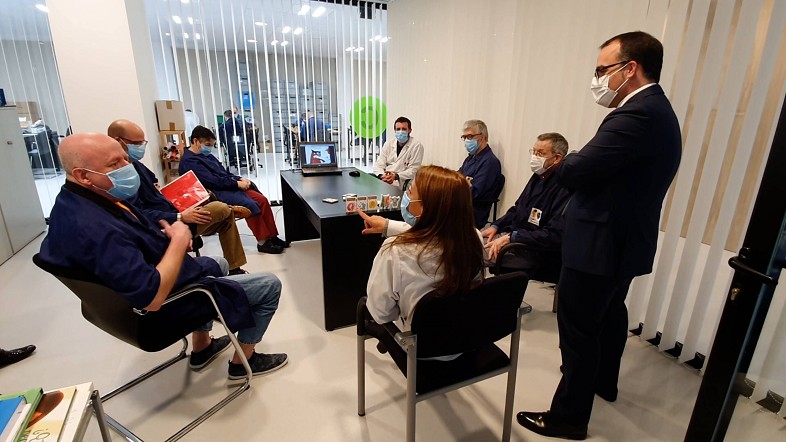 Sergio Murillo with users professionals of the Rafaela María center

Bizkaia’s pilot model, shared with the Territory's network of occupational centres, is gradually expanding throughout the network. The aim is to adapt the workplace environments of people with intellectual disabilities to their ageing process, so that they can remain active by carrying out an occupational activity in a place where they have a network of personal relationships, making this environment a significant space for their life project.

This year Bizkaia Provincial Council will expand to the offer of occupational places of these characteristics with 69 more, reaching 129 for the entire territory during this year. The goal is to adapt support for these people; in this case, the intensity of the support is greater so that people with intellectual disabilities with premature symptoms of deterioration or ageing can continue their activity in these centres. This year they will be set up in the centres managed by the entities Rafaela María, Usoa, Ranzari, Gallarreta and Gaude, joining those of Lantegi Batuak.

The Provincial Deputy for Social Policy, Sergio Murillo points out that with the progressive implementation of these places in occupational centres in the territory throughout this year, "Bizkaia continues to adapt support to the profile of people with intellectual disabilities, also in their workplace environment. We adapt the environments and provide support so that they can continue to develop their life projects. And we do so by anticipating demographic forecasts, which demand innovative responses in the offer of support and services".

Sergio Murillo made this announcement at the Rafaela María occupational centre, where next 1 June 10 places will be launched with support for as many users with premature symptoms of deterioration or ageing. This centre has in fact just opened new facilities in the San Ignacio district of Bilbao, after moving from its previous location in the Zorroza district. The centre offers an occupational service and also functions as a special employment centre. It is attended daily by 60 people with disabilities that receive the support of 15 professionals.

Active ageing of people with disabilities in their workplace environment

The Provincial Council started to implement this interventions model in 2018, after a prior pilot project in Lantegi Batuak centres, assessed with the support of the University of the Basque Country. Their aim, once the symptoms have been detected and assessed, is to alleviate their deterioration, improve their skills and support the active ageing of people with intellectual disabilities, with innovative and transferable tools and methodologies, and with greater personalisation and individualisation. Such that, if they wish, these people can continue to fulfil a productive activity at their occupational centre, in addition to maintaining their routines, and their emotional and social ties.

Bizkaia Provincial Council is convinced, likewise, that no person with disabilities, once their education period is over, should remain at home. As a result, it is committed to covering the costs of places in occupational centres with a total of 10.09 million euros in 2021. This commitment leads the Provincial institution to maintain a total of 1408 places in Bizkaia in occupational centres (1302) and special employment centres (106). This offer guarantees the needs of people with disabilities in the territory.

Occupational activity is a tool for social integration and work becomes a path for the social inclusion of people with disabilities by means of productive activities, in a normalised and normalising environment. In short, these workshops offer people with disabilities greater possibilities to transition to regular work, opening the door to a pathway of personal and/or professional growth, thanks to the special configuration of the workshops that in the "Basque model" include occupational positions alongside protected employment positions (special employment centres).