Bizkaia strengthens the Council of Older People, the participatory body for the province’s older people

The Chairman of Bizkaia Provincial Council, Unai Rementeria, welcomed the members of the Council, led by its new Chair, Manuel Merino, to the Provincial Council Building. Over 60 professionals and older people are involved in the Council’s dynamics to drive and improve ageing policies in the province. 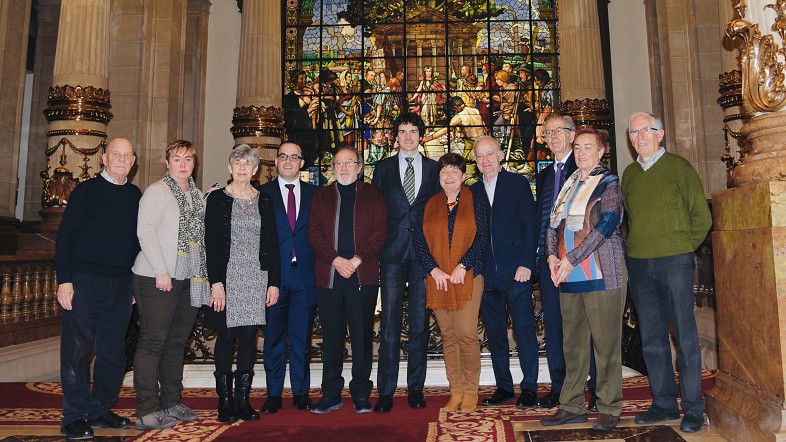 The Council of Older People with Unai Rementeria Sergio Murillo

Bizkaia Provincial Council and the Council of Older People held an ordinary plenary meeting at the Provincial Council Building this morning. During the meeting, they approved, among other aspects, the draft Provincial Decree restructuring and regulating the province’s Council of Older People. After being approved today, the new Provincial Decree will now embark on the normal hearing process., when the conclusions of a reflection and analysis process in the Council will be incorporated.  The outcome will be a stronger body tasked with overseeing Bizkaia’s sectoral ageing policies.

The Chairman of Bizkaia General Council, Unai Rementeria, wished to personally welcome the delegates at the meeting held at the Provincial Council building. Unai Rementeria thanked each and every one of the people in the task forces for their work, because thanks to them, Bizkaia is making progress in public policies aimed at building a more intergenerational and cohesive territory, that is fair and supportive.  This is being achieved by implementing, as regards older people, social action that is progressively more efficient and in keeping with their needs, based on participation and co-creation.

The older people delegation was led by Manuel Merino, the new Council Chair, who has accompanied and backed by Nagusiak, Hartu Emanak, Secot and Nagusilan representatives. The Provincial Councillor for Social Action, Sergio Murillo, the General Manager for the Promotion of Personal Autonomy, Asier Alustiza, and the General Manager for Administration and Social Promotion, Maite de Iturrate, represented the Provincial Council at the plenary meeting.

During today’s meeting, the delegates took stock of the policies deployed to generate and foster optimum living conditions for healthy and active ageing, and approved the work plan up to year end of the different task forces (made up of 60 professionals and older people of the province), to continue to make progress in turning Bizkaia into a place for all ages.

Immersed in the World Café dynamics that began last week, the plenary session agreed that those meetings underway, in which the members of the different task forces of the Council of Older People are actively involved as facilitators, are proving to be highly valuable. The experiences, opinions and proposals of the people of the different generations who have voluntarily taken part in the sessions held in Basauri, Barakaldo and Bilbao, along with those in Getxo and Durango this afternoon and morning, will lead to the new Plan to Promote the Personal Autonomy of and Care for Old People to be prepared by Bizkaia Provincial Council.

The Bizkaia Council of Older People is a representation and participatory collegial body with an advisory, consultative and proactive role, coming under the Social Action Department at Bizkaia Provincial Council. It provides a stable cooperation and open dialogue channel between the provincial council and civil society, which is in keeping with a participatory democratic and governance model. The open government model, the hallmark of Bizkaia Provincial Council, is based on the conviction of the right and ability of older people, who are the recipients of the public policies, to take part and engage in order to respond to their needs, promote their rights and exercise them effectively.

Thus, in this stable space for dialogue, the older people of Bizkaia, through their associations, are working with the provincial government on the policies and actions aimed at achieving the wellbeing of this sector of the population of Bizkaia. The central focus underpinning the functioning of this Council and its actions is to create the optimum conditions to foster Active Ageing in Bizkaia in the framework of the Bizkaia Older People Strategic Plan.

The Council Plenary Sessions meets half yearly and, in addition to consider its own business, it monitors its work plan, deployed by three task forces made up of 60 professionals and older people of the province. A new task force has been set up in order to monitor the evolution of the key variables in Bizkaia to achieve the goals of the Council of Older People.