REJECT ALL ACCEPT ALL

The aim is to provide support and assistance in the guardianship of family members or close relatives of people over 18 years of age whose capacity to act has been legally modified. The service is open to all residents of Bizkaia who are interested in receiving information, guidance and advice on the procedure for modifying capacity and, in particular, to people who are acting as the guardian of a family member and need support in the exercise of that guardianship. Around 6,000 people, including legal representatives and volunteers, will be able to benefit from this service, which is already operational. The Deputy for Social Policy, Sergio Murillo, believes that a guardian, family member or close relative “is the best person to interpret the will, wishes and preferences, and to better guide the decision-making process of people with disabilities whose capacity has been modified”. 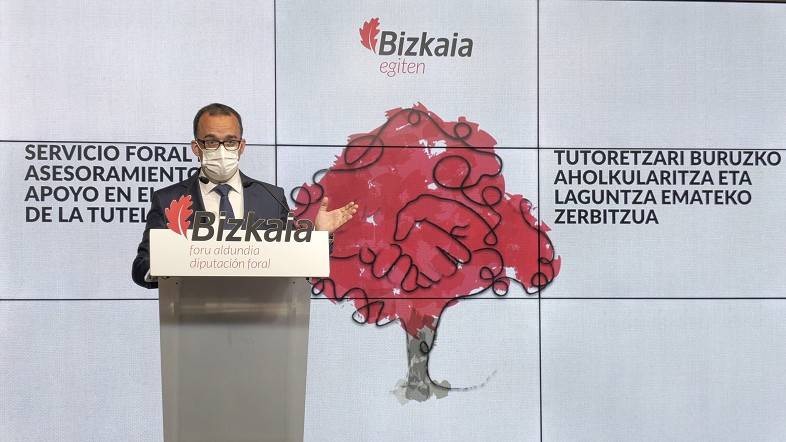 The Bizkaia Provincial Council, through the Safeguarding Institute of Bizkaia, launches the service to support the exercise of guardianship by relatives or close friends of people whose capacity to act has been legally modified. It involves a series of measures that aim to allow those closest to those under guardianship to be able adopt and maintain the guardianship, with the necessary support.

Through this service, information and advice will be offered on the exercise of guardianship and support tools for fulfilling the obligations derived from it, such as the taking inventories of assets, rendering of accounts, requesting judicial authorisations, etc.

There are currently 5,849 people in Bizkaia who have a family member or a close relative as their representative, either as a legal representative or as a volunteer.

The Deputy for Social Policy, Sergio Murillo, states that all these people, guardians or legal representatives and volunteers, can now benefit from the Provincial Council’s new service to carry out this work: "Those closest to those with disabilities who have had their capacity modified, working to guarantee rights and promote a full life".  Because "they are best placed to interpret their will, wishes and preferences," says Murillo.

In addition to these people who are legally and voluntarily represented by a relative or close relation, the Safeguarding Institute of Bizkaia, affiliated with the Department of Social Action, currently exercises the guardianship of 1,649 people from Bizkaia. Most of the elderly people under guardianship, 963 individuals, live in a care home. The rest of the people under the care of the Provincial Institute, 686 in total, live at home.

Any person over 18 years of age who has an illness and/or physical or mental disability, which is long-lasting, and which prevents them from looking after their own affairs, can have their capacity modified (or be placed under guardianship). The most common causes are severe intellectual or developmental disabilities, cognitive impairment or advanced dementia, and some mental illnesses and disorders that affect a person’s perception of reality.

The new advisory and support service for the exercise of guardianship launched by the Provincial Institution offers:

This new service will be offered at the offices of the Safeguarding Institute of Bizkaia in Alameda Rekalde, 18, Bilbao. To become a user of this service you must make an appointment by calling +34 94 608 37 40.

The timetables established for in-person assistance at the Safeguarding Institute of Bizkaia, depending on the type of support required, are as follows:

For the last two services, families must provide the incapacity ruling, the acceptance of the position and any additional documentation required.

Informative day for professionals and families

The Bizkaia Provincial Council will address the issue of the modification of the capacity to act and the support measures on guardianship within the framework of an informative day aimed at both professionals and families. The day will be held this Tuesday, 27 April, divided into two separate morning and afternoon sessions, with the participation of experts in the fields of the judiciary, law and ethics.

The morning session will be aimed at professionals, especially those working in the field of social services. It will discuss the current model of support and the planned legal changes aimed at providing a dignified and full life for people whose capacity to act has been modified.

The afternoon session, aimed at families, will address the implications of the modification of the capacity to act (guardianship or physical custody) and the support mechanisms available to them for exercising this.

The day will be held at the Euskalduna Conference Centre in person (until full capacity is reached) and can also be followed via a live stream. Over 960 people have already registered.

You can find more information and register at Topaketak.